Almost waited for storms to go up from Amarillo, but decided to venture out east and wait at Claude around 2pm. I decided against crossing the canyon to catch the storms that fired down by Tulia, as I didn’t want to be out of cell service that long. With Rhonda pregnant and about 10 days from her due date, that wouldnt be a smart move. Was also set on not venturing too far from Amarillo, for that reason. It took a while for storms to take off. If it looked good on radar, it looked bad visually. If it looked good visually, it looked horrible on radar. Met up with Blake and Chris (other Amarillo chasers) at Claude and tried to figure out if to stay with the northern storm, or wait on the Tulia storm to cross the canyon. The northern storm finally started to organize after it passed us moving +50mph. It was at White Deer before we left I-40. We got fortunate, because as it began to spin, it slowed to 35kts. As it passed between Skellytown and Pampa, it dropped a large bowl that I thought was a wall cloud. Only realized it was a funnel after it began to rope out. By this point I was west of Pampa and the southern storm was just getting north of the Canyon. 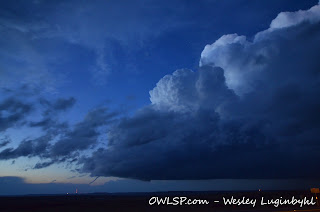 We continued north of Pampa as the storm dropped another funnel that would last ~20 minutes. We got all the way up to the Canadian River and watched it rope out slowly. After giving that storm one more chance and no new lowering we finally bailed back south using the FM283 that cuts off Highway 70 to Miami, TX. It was a gamble to beat the fast moving storm that was bearing down on Pampa by that point with multiple reports of tornadoes. Clipping through the outer edges of the core the reports of “wedge” start getting through. Hearing “wedge” makes you want to get out of there faster, but being on that winding 2 lane road in the core at night made that not an option. I was able to clear the core a few miles before Miami while the tornado was still close to Pampa. It was an eerie feeling entering Miami that had already lost power and the only lights were emergency vehicles running around town probably trying to warn as many as they could. With the direction the storm was going I wondered if the town would still be there in 15 minutes as I blasted south out of town to get out of the canyon and try and see the “wedge”. 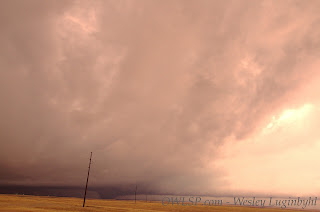 I got to the ridge where I had set on chases before with Marcus and Steve back in 2010, only difference this time was a huge wedge in the darkness coming my way. I could see the large tornado right as I stopped being lit up by the lightning. I got out and set up the tripod, but every shot kept getting blown out by close CGs. On top of the lightning barrage, the inflow winds were enough to blow the tripod over even without a camera on it so I couldnt even leave it out there. I scampered back in the car and used my window mount to take pictures. Not the steadiest shots as the vehicle was being rocked by the winds. I only got a couple shots of the wedge, before it occluded into the rain and disappeared into the darkness. The next cycled tried to produce just a few miles to my north but couldn’t do it.
It was at this time I noticed another wedge with the storm that was behind the first wedge producing storm. The tornado was illuminated, not by lightning, but by a prison that was nearly hit by the tornado. It is very freaky to be able to see a tornado at night by lights on the ground. I lost visual of that tornado till it got closer to Miami. It was still going strong but had shrunk down to an elephant trunk in size. I viewed it for another 5 minutes till it vanished. At that point I called the chase off and began to try and figure out how to get home as I was not sure if I could drive home through Pampa or not. Only encountered some power line and tree damage along the highway, but was able to get through town and back to Amarillo using only 1 tank of gas on the entire chase. $22 for 5 tornadoes and 2 wedges is a great deal in any month, but insane for November. If this is a taste of what this El Nino winter has in store, hold onto your butts. 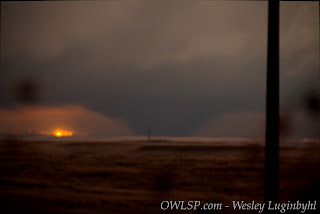 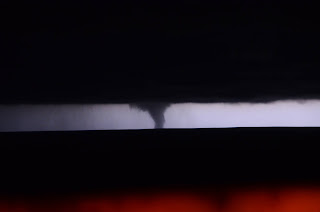 Posted by Wesley Luginbyhl at 11:35 AM