Last Sunday turned out to be a spectacular day. I had high hopes for this chase, and were exceeded with ease though our exact target area was a bust. Had multiple issues this day, like only having internet for about 10% of the time and my camera stopped recording in my dome halfway through the chase. Despite these problems it was still a great chase.

Started the day targeting the Eastern TX Panhandle, but focused more on the NE Panhandle. We set on I-40 for an hour or so, but eventually moved up to Pampa till about 4:45. After watching the stuff near Childress go for a couple hours finally gave up on the NE Panhandle ever firing and decided to head SE. I made a straight shot into OK to near Sayre and cut south in front of the slow moving storm cluster. Going this route instead of coming in from behind gave me one of the best storm structure shows of my life, which made my day even without the tornadoes. I set in the area around Willow, OK and let the storm come to me. Witnessed 3 tornadoes before the storm even got to my location and saw 2 more within the next 20 miles of driving on the clogged highway. Total tornadoes for the day is 5, but I could easily argue 7 or so not that it matters.

This day will not be topped anytime soon, because I have rarely seen structure like this that also produced so many tornadoes, even a quite large one you can see in the first photo below. As long as it took me to give up on the other target I really should not have any tornadoes to show for Sunday, but mother nature threw me a bone after my pathetic showing in 2011. I am going have another 25+ tornado year one way or another. I got close in 2010 with about 22 tornadoes, but have not topped 25 since 2007. An active year here in the Panhandles will be key to this happening though. With the recent rains it is not that far fetched anymore.

Posted by Wesley Luginbyhl at 10:20 AM 2 comments:

First chase of the year tomorrow

Technically it is not my first chase this year, but on a day that has any real potential it is. Will be deploying my reconfigured camera dome with a new HD camera tomorrow. Stream should be up around 4 to 5 tomorrow. Also this will be the first chase with the dome on my Saturn Ion. Think I got most the kinks out of the system on Wednesday so I am hoping it is all smooth sailing tomorrow and on Sunday.

Target area for tomorrow and Sunday is the Eastern Panhandles for now. Better shot of tornadoes is for Sunday, but will take anything at this point to start making up for my 2011 season.
Posted by Wesley Luginbyhl at 1:54 AM No comments:

Severe Weather makes its return to the Southern Plains 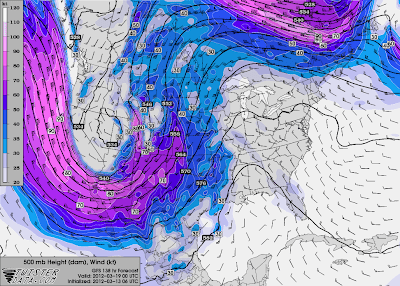 The next week could be very active with a major storm system set to dig into the southwest US. Could be a stray storm Wed and Thu, but Friday looks to have the first decent shot at storms, followed by a capped day on Saturday. Mondays focus has now shifted to Sunday that has a 50+ knot low level jet across the entire Great Plains, which now is forecasted to a breakable cap and precip before sundown. It really reminds me of March 28, 2007, which I hope it shifts back west a little like 3-28-07 did as the day got closer. Monday still looks to be an intense day closer to I-35 than the previous days, with a massive squall line forming late that day and ending the severe weather outbreak. Forecast is sure to shift around some more, but will probably end up somewhere close to this.

Tornado potential exist on almost all of these days, but Sunday looks the highest followed by Monday. Friday is not out of the question and may be the most photogenic day. The parameters for Sunday just screams large tornadoes if it verifies, which has me worried the most. The Southern Plains really needs the rain though, so you just have to take the good with the bad. The attached picture is the forecasted 500mb winds for Sunday evening.

This next week looks to be the first likely deployment of my new HD camera in my dome box that modded up more this year. My plywood base began to some effects of a year of wear, so I wrapped it in black duct tape to try and preserve it a bit longer with a likely rebuild next year. Also I bought a roof rack for the Saturn Ion so the dome can be deployed on my 30+mpg vehicle. Finished building a fairing for it just the other day which eliminated road noise completed and surely will help gas mileage as well.
Posted by Wesley Luginbyhl at 9:30 AM No comments:

You can now get my Storms of the Southern Plains for $5 as a digital download. The original DVD included my chases from 07-09, but I have now included two 2010 chases. April 22 in the TX Panhandle and May 22 with the Bowdle, SD wedge tornado. The download is 4GB so a good internet connection is needed. You will be able to play the file on your computer or burn it to DVD if you have a burner.

Get the Digital DVD here - No Longer for sale
Posted by Wesley Luginbyhl at 10:54 AM No comments: